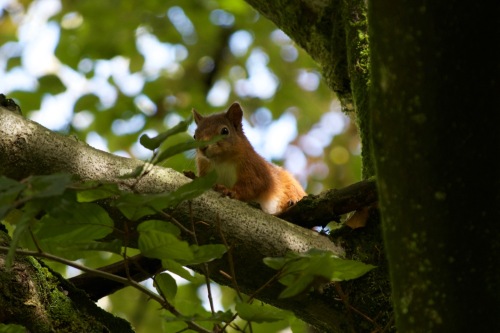 Allan Bank above Grasmere in the Lake District is an unusual National Trust house: unfurnished and deliberately informal in a way that puts some NT properties to shame. You won’t find volunteers telling you off for getting a smartphone out to look something up (“No phones here young man!”) or even worse a camera (viral marketing by happy visitors passes them by…) No, at Allan Bank you can pull up a chair, get one of the board games out, try the paints, help yourself to coffee. When you arrive they really do tell you to make yourself at home. Which is nice, because it’s in area with active red squirrel conservation and the animals are easy to see at the feeders on the lawn and in the surrounding woods.

William Wordsworth lived in the house in 1808-10, and while he condemned its exterior, he loved its views over Grasmere and up to the surrounding hills and mountains. You can see Grasmere in this picture, along with some of those paints I mentioned. There’s plenty of paper too.

The house was severely damaged by fire in 2011 but restored and opened to the public by the National Trust for the first time a year later. The walls are bare plaster and there’s donated furniture, an informal cafe, a self service shop upstairs (pay at the till on the ground floor if you want to buy anything), a small mountaineering library, a room full of toys and dressing up outfits for children, and lots of places to enjoy the views. 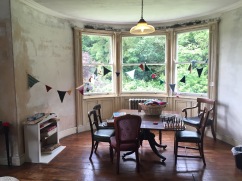 That last picture shows the view out on to the lawn where bird and squirrel feeders are set up. At the opening time of 10am it was very quiet and squirrels were helping themselves. (It was also no surprise that a selection of binoculars were provided by the house.) I took several batches of photos but the first one taken was the view of one of the feeders taken from the far side, well behind the bushes and trees. 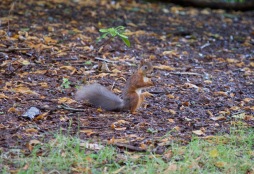 The reds are there because of the hard work of the volunteers of the Grasmere Red Squirrel Group in controlling grey squirrel numbers. And yes, that does mean trapping and killing them. Greys suppress red squirrel numbers by competition, but they also carry the Squirrel Pox virus which almost eliminated the red population in 2002. Another outbreak started in 2015 and the public’s help is needed again. Longer term I think pine martens will be a big part of suppressing the North American grey squirrel in favour of the native red, but we have to keep the current population of reds going until that time comes.

I also spotted squirrels on the steep walk up through the woodland that surrounds the house, which has same excellent views too. This panorama from a stone viewing platform at the top of the walk, shows the view into the next valley and an almost canopy-level view of the trees.

The house also has a kitchen garden, which was given a Beatrix Potter flavour as Mr MacGregor’s garden this year. Work is ongoing to restore it, and there’s a newly built gardener’s bothy with a verandah where you are invited to sit and enjoy the view.

Allan Bank really is a gem of a house, as well as great place to see red squirrels. Just don’t tell everyone else, ok?