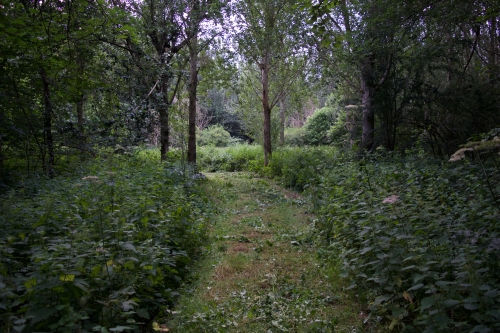 I started sketching out routes for the ride network when I bought Century Wood but only started work seriously about a year later. Before then as the first summer bloomed I was faced with ground vegetation, especially nettles, which threatened to become impenetrable. Over the years I’ve employed various techniques for mowing the rides and glades, or even just getting around. Eventually I settled on a scythe mower which is still serving me well seven years later.

The first few times I was faced with getting through stands of nettles above waist height I grabbed a stick and whacked the stems to break them. It’s surprisingly effective as long as the nettles aren’t too dense, and was ok for wading through as long as I had decent jeans to deal with the surviving stumps round my shins. Later I bought a machete and set about it in a more professional manner, but it’s a very labour intensive way of going for a walk through your wood. These tracks did last a week or two though, and so could be used for cutting out a route that less intrepid visitors could use. I still use this kind of approach if faced with nettles barring my way somewhere off a ride.

I experimented with using a garden roller, with its drum not yet filled with water, sand, or cement. That worked a lot better than you’d think too as nettles and cow parsley have stems that break rather than just bend as long grass does. You do feel like you’re walking on a rather springy bed make of the stems though, and it sounds like a ridiculous idea when you try to explain it.

I stepped up to a cheap no-name petrol brushcutter which was my first proper solution. With this I was able to cut all the rides to about eight foot wide, by making two trips over their one kilometre or so distance, and mow the glades and car park too. This took me about two days of work, so was feasible to do bit by bit more than once per season. 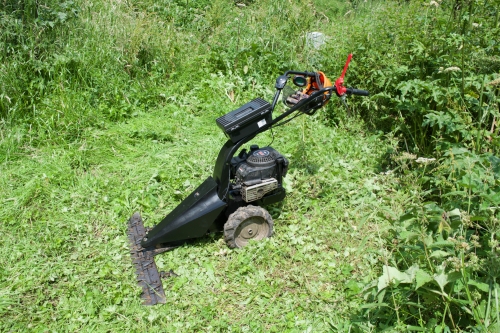 However, I knew a better solution was a petrol scythe mower. This is effectively a hedge trimmer set horizontally just above ground height and mounted on a pair of driven wheels with handles for you to steer and work the controls. These are extremely effective and tackle small woody growth in addition to anything green you put in their way. Since there are just two wheels with the cutter itself on skids, they also deal with uneven ground and small obstacles like logs that hide in the undergrowth.

The mower I bought is made by Al-Ko in Germany, and I managed to get a much better price by buying it online from France. I took a bit of a risk about the complications of returning it if faulty, but for ongoing maintenance and servicing buying a brand name rather than a “no name” machine from China was worth it. Plus the engine is Briggs and Stratton which most lawnmower workshops are familiar with already.

One of the key things about a scythe mower is that there’s lots of vibration. The springy handle bars don’t transmit it uncomfortably to my hands (unlike my no-name brush cutter) but you need to check for loose nuts and bolts each time. I lost one key plastic part of the cutter by not checking this enough, and the rapid side to side motion of the top blade threw it off into the undergrowth never to be seen again. Back home I tried welding together a replacement piece, but that started wearing down the adjacent pieces and I had to get (inexpensive) replacements from Germany. It’s worth getting more spares than you need, and carry spare nuts and bolts too in case things rattle free on site.

This year I decided to repaint the body of the mower, which started life at silver grey but inevitably got scuffed and rusted at the corners. I chose black to match the engine block and handle bars, and because it’s a discreet colour for equipment parked in woodland shade. Not that I leave it at the wood overnight. I also attached a small toolbox for things like a bottle of water and some bug spray.

The cutter consists of a fixed bottom blade and a moving top blade, each with triangular teeth about 5cm apart at the points. These slide over each other to cut, and that defines the thickest stem which can be cut through in one go. That’s about the size of a fat thumb, but in reality thicker ones can be cut by letting the blades chew at the sapling from one side. I’m cautious about doing this aggressively though, in case I overheat the engine.

For the nettles, cow parsley, saplings, grass, and other ground vegetation that I mostly deal with, the mower works very well. It’s also fine with isolated brambles which give up after a few passes over the year, but isn’t effective where the brambles have formed clumps woven in and around other plants. In that case slicing away at ground level doesn’t disturb the brambles very much, and they tend to spring back once the mower has gone past. So it’s necessary to do something else (machete, bill hook, secateurs, chainsaw?) to disconnect the brambles from their root and then start shredding them with the scythe mower.

These two pictures (click for bigger versions) show a before and after in the main glade of the wood last week. You can really see the height of the vegetation which the mower dealt with in a single pass. It hasn’t been mowed since 2015 so the grass has been suppressed by the other plants. I hope by the autumn it will have reasserted itself again.

It really deserves its own post, but I’ve also observed significant recolonisation of the rides by grass after repeated mowing. I also vary the edges of the rides that are mowed to encourage a variety of ground plants, but in some areas I just want grass for the amenity value.

These pictures show two sections of ride after mowing, and again you can get a rough idea of what the mower cut through from what’s still on either side.

In terms of protective equipment, the requirements are less than a brush cutter because you’re safely standing behind the handle bars while the engine is running. Especially, while the clutch for the cutter is engaged and the blades are moving. With the two clutch levers for the cutter and the driven wheels on different handles, it requires you stay safely at the back. All this goes out the window for other people around you of course and so it’s really a machine to be using without other people nearby.

I just use rigger gloves and a chainsaw helmet with visor and ear defenders beyond what I normally wear in terms of decent boots and thick jeans. I find gloves and visor to be essential when tackling nettles and cow parsley that are up towards eight foot high and tend to topple over towards me as they are cut at the base. The helmet itself protects me from any other surprises. 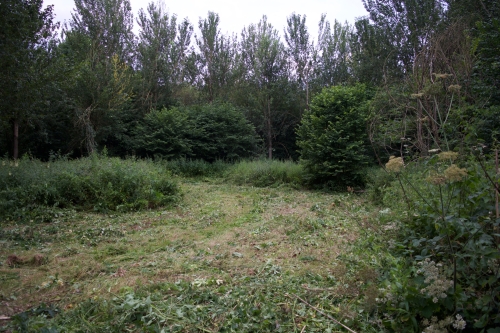 My reason for moving up from the brush cutter to the scythe mower was to reduce the time and effort taken to maintain the rides and glades, and this worked out very well. It’s less tiring but also faster, certainly in my amateur brush-cutting hands. What used to take me two days if I mowed everything, now takes a long afternoon and early evening, and when I was establishing the rides I did it all once a month for two summers.

I found that the least tiring pattern is to walk in straight lines or long lazy curves. Good for rides, and something that works in glades if I go in a spiral. What is very hard, harder than the brush cutter, is tight corners where you need to manhandle the mower round. So up and down stripes like you might do with a lawn mower aren’t a good idea. Reversing out of a clump of nettles that is just too thick and heavy to push through becomes very tiring too: it works better to keep trimming away at one edge so you’re always walking forwards.

All in all, the scythe mower has been one of the best investments I’ve made, especially for the amenity value of maintaining the grassed rides and open glades.

ETA: In 2020 I uploaded a video of the scythe mower in action.