The long tail concept is now commonplace in business and computing. It’s the idea that most subjects are dominated by a very large number of small categories. That the “big hits” are actually outsold by all the niche songs or films or books that sell in ones and twos. Some of this thinking can also be applied to forestry, and how small woodlands can be brought into management.

The Long Tail was introduced by an article in WIRED magazine in 2004:

What’s really amazing about the Long Tail is the sheer size of it. Combine enough nonhits on the Long Tail and you’ve got a market bigger than the hits. Take books: The average Barnes & Noble carries 130,000 titles. Yet more than half of Amazon’s book sales come from outside its top 130,000 titles. Consider the implication: If the Amazon statistics are any guide, the market for books that are not even sold in the average bookstore is larger than the market for those that are.

How does this compare to woodlands in England? The most recent comprehensive survey we have is the Forestry Commission’s report “National Forestry Inventory 2011 woodland map”, and the picture is strikingly similar. 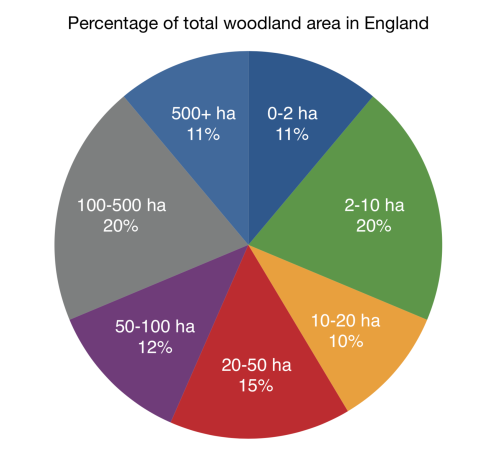 So it’s obvious that smaller woodlands really matter. People in the small woods community have been saying this for years but it’s still not properly reflected in our national debates about forestry, especially in the media. The image is of rolling hills and valleys draped in conifer plantations and their patches of clear fell.

What lessons do Amazon and the rest have for policy towards small woodlands? What does their success with the Long Tail tell us?

To answer this we have to think about how they manage to turn all those niche titles into dollars and pounds. In the past, out of print books and forgotten films sat on shelves or were boxed up in the corners of warehouses. Out of sight and hard to find. “Unmanaged” as it were. To bring those titles back to life, companies like Amazon harness the enthusiasm of customers to find them and to recommend them to other people. Star ratings and the words “Customers who bought this item also bought” suggest what else might be worth looking at. This means the enthusiasts of the Long Tail of niche titles power the whole process themselves. Amazon staff don’t have to decide what to show people or guess what is worth looking at.

The small woods problem is very similar. How can the government, or the Forestry Commission, or even a hundred unitary and county councils help manage 200,000 small woods? They can’t, obviously. What they can do is provide an environment where the owners of those woods can get on with it themselves. But they don’t: legislation and planning rules which are tailored to big forestry aren’t appropriate for the half of English woodland in small woods. The rules are focussed on timber production and don’t scale down to the management of small woods, both those run with a commercial aim or those managed for “Natural Capital”, as part of flood defences or for conservation or amenity value – such as an ancient woodland site with a plan to remove invasive species and encourage native ones.

There are three planning issues which come up time and again amongst small woodland owners and managers:

Brexit is turning everything upside down. Changes to grants. Changes to foreign trade agreements and tariffs. Changes to what we think it’s all for. If we want to make the most of what we have and do in this country, we need to think about what is underused. And in our corner of the debate, which has the label Forestry, it’s the half of woodland that is in small woodlands which is underused.

11 Replies to “Small woodlands: the Long Tail of forestry”