At the start of the year I blogged about natural regeneration of woodland, and the land’s ability to regrow trees and resurrect forests from seeds waiting in the soil if deer, sheep, and humans allow it. One of the examples I used was a dramatic photo from Alan Watson Featherstone’s blog which he took in Glen Strathfarrar. It shows the effect of deer fence in allowing trees to come by themselves if left ungrazed. In April I visited the valley myself. 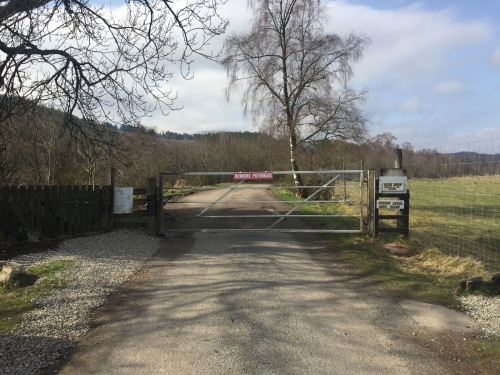 There is a 17 mile long private road running most of the length of the glen, with the low land and the hills also part of a private estate. Scots law has always allowed access to private land on foot and wild camping, but car access is controlled by the land owner. In this case, there is a gate near the village of Struy and 25 cars per day are allowed in. You get a ticket and your registration is noted to prevent overnight stays with cars. There is also a hydropower station in the glen, so there is some engineering traffic too.

The pictures above show the lochs and islands driving westwards along the glen.

As I drove, I saw several deer, including this one which kept ahead of my car and couldn’t go off up the hillside due to the deer fencing running parallel to the road. At one point a couple of buzzards were also circling.

Apart from construction activity around the hydropower station, the only people I saw were in two four wheel drive pickups (gamekeepers?)

The picture on the left shows a derelict house and in the distance on the right you can see the estate owner’s house in the distance, surrounded by trees.

Coming now to the purpose of my visit, this is what I wrote in January:

Alan took this striking photo there of forest regenerating naturally, which he has kindly allowed me to reproduce from his blog post. There’s a deer fence in the middle. To the left, trees are coming back naturally with deer excluded. To the right, the trees are scarce and the deer are free to browse any saplings that emerge. 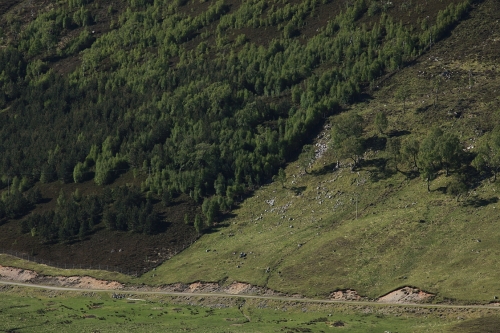 This next picture shows the new woodland in context, with the surrounding ground in April not as green as in Alan’s photo from May.

The road is near the bottom of the picture and I parked up and walked up the deer fence boundary on the right hand side of the wood.

This is the fence itself, as it heads up the rather steep hillside. The effect is particularly striking in the photo on the right.

The day after I visited Glen Affric and saw evidence of pine martens, which I’ll post about next.