I’ve done a lot of travelling this year and last month this included New York. Henry David Thoreau lived there for most of 1843, a year and a bit before he went to live in the cabin in the woods by Walden Pond that I wrote about in April. Naturally, I made time to retrace some of his steps and photograph one of the woods he probably knew.

Before we get on to my visit in August, I should explain the context. Thoreau’s mentor was Ralph Waldo Emerson, who had established himself in Thoreau’s native Concord in Massacheusetts, writing and giving popular public lectures in a world before television and film. The town of Concord had a good road to the city and port of Boston via Cambridge, the location of Harvard College. So Emerson and Thoreau were able to get around and enjoy a cosmopolitan environment, whilst living within sight of fields and woods.

Emerson in turn had an older brother, William, who had moved to Staten Island in New York, practiced law and became a judge and altogether rather successful. He lived in a house called the “Snuggery”. Originally a cottage from before the War of Independence, it had been extended and upgraded. It stood by what is now Douglas Road on a rise that is now called Emerson Hill. Today this is a rather well to do area, with its own website and page about its history : if you’ve seen the film “The Godfather”, a house on Emerson Hill was used for that big house owned by the Corleones. Back in 1843 it was very rural, with farms and scattered houses, fields and woods.

Ostensibly Thoreau came to Staten Island as the tutor of William Emerson’s son, but really it was to allow him to make contacts in the New York literary world over on Manhattan, and try to get his career properly started. As today, Staten Island is connected directly to Manhattan by ferry and so its situation was not unlike that of Concord in relation to Cambridge and Boston. Except New York was already a much bigger literary and publishing centre. And a bigger financial centre. In fact a much bigger everything.

Thoreau’s famous diary is silent during his stay on Staten Island but we have many letters that he wrote during those months, and they are readily available on the Walden Woods Project website.

My own journey started at the Trinity Church on Broadway. The first church was built in 1698 for the Anglican community in the city, but during Thoreau’s stay the current building was under construction. When it was finished in 1846 it was the tallest building in the United States. Now it is positively dwarfed by the surrounding skyscrapers of Lower Manhattan. Thoreau mentioned Trinity Church and the nearby stock exchange in a letter to Emerson on 23rd May as part of his initial reaction to the size of the city.

The crowd is something new and to be attended to. It is worth a thousand Trinity Churches and Exchanges while it is looking at them – and will run over them and trample them under foot one day.

And before that in his first letter from Staten Island, on 11th May to his mother:

I am seven and a half miles from New York, and, as it would take half a day at least, have not been there yet. … But it is rather derogatory that your dwelling-place should be only a neighbourhood to a great city, – to live on an inclined plane. I do not like their cities and forts, with the their morning and evening guns, and sails flapping in one’s eye. I want a whole continent to breathe in, and a good deal of solitude and silence, such as all Wall Street cannot buy, – nor Broadway with its wooden pavement. I must live along the beach, on the southern shore, which looks directly out to sea

Soon Thoreau was going over the water to New York (ie Manhattan). Indeed by 1st October, he wrote to his mother that he had crossed the bay 20 or 30 times. He went across by steam ferry. He preferred the ferries between the upper dock on Staten Island to a dock near the Battery on Manhattan. This is almost exactly the route of the modern day Staten Island Ferry. On May 22nd he said the boats left five or six times a day. By June 8th he wrote “the boats now run almost every hour, from 8 A.M. to 7 P.M. back and forth, so that I can get to the city much more easily than before”.

Now the Staten Island Ferry runs 24 hours a day, leaving every 15 to 30 minutes, and taking less than half an hour to get across. Surprisingly it’s completely free: you just join the mass of people waiting by the doors and get on when they open. I took this picture from the ferry as another one passed.

On the island I got an Uber to Douglas Road. It is indeed an inclined plane facing Manhattan, as well as in the metaphorical sense of Thoreau’s observation. And a rather steep plane at that. In the first photo the suspension bridge is between Staten Island and Brooklyn. I took the photos near number 37, where the Snuggery was, and where William Emerson and family lived, and where Thoreau stayed.

Going up the hill in the heat and humidity of August, I reached the high ground formed during the last Ice Age when rock and soil were dumped by the glaciers in a type of hill called a terminal moraine. This is quite similar to the geology around Thoreau’s native Concord, and there are small kettle ponds on Staten Island formed the same way as Walden Pond itself. The nearby Todt Hill is the highest point on the Atlantic seaboard between Florida and Cape Cod.

I have got quite well now, and like the lay of the land and the look of the sea very much – only the country is so fair that it seems rather too much as if it were made to be looked at. … This is in all respects a very pleasant residence – much more rural than you would expect of the vicinity of New York. There are woods all around.

and on 6th August to his mother:

I should have liked to be in Walden woods with you, but not with the railroad … I go moping about the fields and woods here as I did in Concord, and, it seems, am thought to be a surveyor, – an Eastern man inquiring narrowly into the condition and value of land, etc.

In Thoreau’s absence the construction of the Fitchburg Railroad had reached Concord and a large embankment cut across part of Walden Pond itself. Its presence would be felt in his account of living by the Pond from 1845, and he was both fascinated and slightly appalled by it.

My own rather planned wandering took me up to Deere Park on Todt Hill. This 40 acre woodland owned by the city is named after a previous owner, Charles Deere, son of John Deere who founded the famous farm and forestry equipment company. I entered on the short Staten Island Boulevard and followed the trail through to Todt Hill Road and Ocean Terrace, near the summit. You can see the photos if you scroll down. It’s not that different to Walden Woods and you can see why Thoreau felt at home. 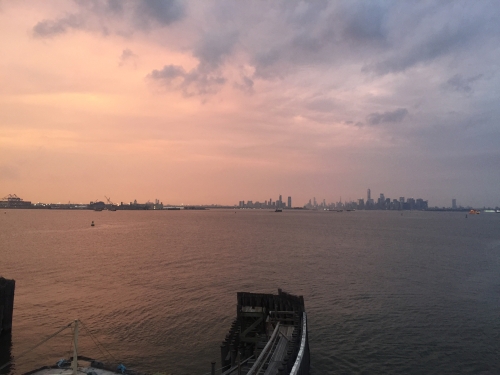 Thoreau left Staten Island and moved back to Concord in December 1843. Within eighteen months he would building his cabin and preparing to live in the woods beside Walden Pond. I returned to Manhattan by the ferry as the sun set. 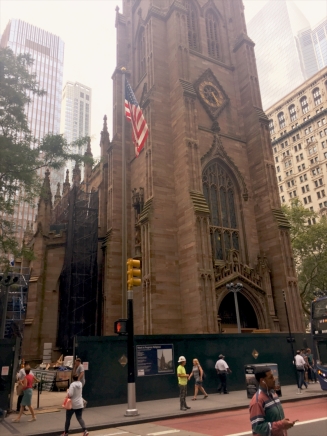 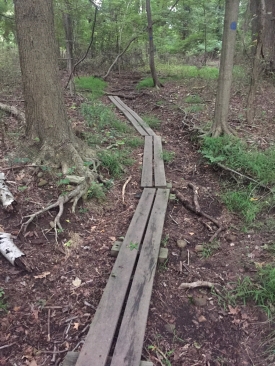