This concise but beautifully illustrated book was originally published as “Shinrin-Yoku: the art and science of forest bathing” but now appears as “Into the forest: how trees can help you find health and happiness“. There is plenty of substance behind the pictures: Qing Li is regarded as the world’s leading expert on forest medicine, and was instrumental in providing a scientific basis for the benefits of Japanese shinrin-yoku or “forest bathing”.

Chapter 1 begins by explaining the origin of shinrin-yoku:

The term was invented in 1982 by the then Director General of the Agency of Agriculture, Forestry and Fisheries of Japan, Tomohide Akiyama, who stated that the people of Japan were in need of healing through nature. The idea was also part of a campaign to protect the forests. If people were encouraged to visit forests for their health, they would be more likely to want to protect and look after them.

At first it was a way of “selling” forest visits by invoking the common sense idea that they make people feel better. But Qing Li himself began assembling the evidence that these are real effects:

It was not until 2004 that scientific investigation of the link between forests and human health began in earnest. Together with various government agencies and academic organizations in Japan – and still feeling inspired by my experiences on Yakushima – I helped found the Forest Therapy Study Group, with the express aim of discovering what it is about trees that makes us feel so much better. The following year, I set off for Iiyama city, in the mountainous north-western corner of Nagano Prefecture, taking twelve healthy middle-aged businessmen from Tokyo with me for a three-day scientific forest-bathing trip. … It was in Iiyama that we first scientifically proved that forest-bathing can: boost the immune system; increase energy; decrease anxiety, depression and anger; reduce stress and bring about a state of relaxation

Some of these effects, like decreasing anxiety, are measured by the subjects filling in questionnaires before and after, but others, like the immune system state, are objective measures with blood tests. And the results are striking:

One of the ways we test the health of the immune system is by looking at the activity of our natural killer (NK) cells. Natural killer cells are a type of white blood cell and are so called because they can attack and kill unwanted cells, for example, those infected with a virus, or tumour cells. … In the first forest-bathing study I undertook in Iiyama, I found that after three days and two nights in the forest: NK cell activity went up from 17.3 per cent to 26.5 per cent – a 53.2 per cent increase. NK cell numbers went up from 440 to 661 – a 50 per cent increase. The presence of anti-cancer protein granulysin was up by 48 per cent.

How does this happen? Is it just a result of reducing anxiety etc? Well no, Qing Li then went on to identify the phytoncides as key agents. These are chemicals in tree sap which kill insects, bacteria and fungi which harm the trees, and are also released by trees to communicate. (See Peter Wohlleben’s book for much more on this.) Bottle phytoncides, put them in air fresheners, expose Japanese business men in hotel rooms to the chemicals, and there are measurable improvements in the state of their immune systems. Not as much as walking in a forest, but it shows that phytoncides are part of the picture. There are some clues about other components: inhaling (or even injecting!) some forest bacteria have a positive effect on people’s state of mind. 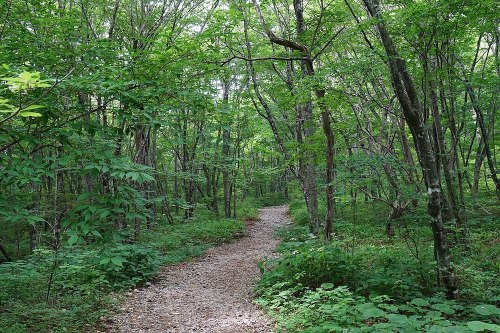 With the scientific basis outlined in the first chapter, Qing Li moves on to how you can benefit from shinrin-yoku yourself.

Make sure you have left your phone and camera behind. You are going to be walking aimlessly and slowly. You don’t need any devices. Let your body be your guide. Listen to where it wants to take you. Follow your nose. And take your time. It doesn’t matter if you don’t get anywhere. You are not going anywhere. You are savouring the sounds, smells and sights of nature and letting the forest in. … Listen to the birds singing and the breeze rustling in the leaves of the trees. Look at the different greens of the trees and the sunlight filtering through the branches. Smell the fragrance of the forest and breathe in the natural aromatherapy of phytoncides. Taste the freshness of the air as you take deep breaths. Place your hands on the trunk of a tree. Dip your fingers or toes in a stream. Lie on the ground. Drink in the flavour of the forest and release your sense of joy and calm. This is your sixth sense, a state of mind. Now you have connected with nature. You have crossed the bridge to happiness.

There’s also a chapter about introducing shinrin-yoku ideas into your home, although I found that the weakest section of the book. But perhaps I’m just biased towards experiencing woodlands themselves. (It’s even worse than that, as I’m writing this as the UK is lockdown for COVID-19, and Britain’s rich inheritance of woods and forests feel far away.)

In the final chapter we move on to the future.

Forest-bathing is now a standard practice in Japan. There are sixty-two forest bases and roads across the country, all designated healing forests and each with a particular healing feature. In Kunigami, in tropical northern Okinawa, you can feel the yanbaru-no-mori, the subtropical natural environment, on your skin. In Chizu, Tottori, flows one of the best streams in Japan. Akasawa has the intense special fragrance of the hinoki trees. Experts in forests and health care are on hand in many of our bases to help you to connect with nature through all five of your senses and to make the most of its restorative powers. In some of our forest bases, you can be accompanied by a doctor as you walk or have your blood pressure checked in cabins along the trail.

But of course this is all under threat where woodland and forest are under threat, and so Qing Li believes that forests have a special place and their destruction posts a special danger:

Our health and the health of the forest go hand in hand. When trees die, we die. If our forests are unhealthy, then so are we. You can’t have a healthy population without healthy forests.

How can we achieve this? This brings us back to the beginning when the forestry agency promoted the idea of shinrin-yoku to increase people’s involvement with forests:

The key to preserving our forest, wherever it is, is to maintain our connection with it … When we feel connected to nature, we want to look after it. … We will benefit not just from the clean air and water forests provide, the carbon they store, the species they maintain, but also from the peace and quiet they offer, their beauty and vital spirit, and the myriad benefits to our well-being they hold within them.

And how to make this change in society sustainable, generation upon generation? By introducing our children to the forest of course.

A growing body of evidence shows that being in nature when we are young creates a sense of connection with the natural world that lasts as we grow up. Children who have fun in nature will become adults who care for and protect it and understand its importance. If we let our children play outside now, they will become the green architects of the future, the green city-planners and tree-mappers, the gardeners, nature therapists and forest-medicine doctors!

When you think about it, children’s stories, books, and imaginations are full of forests. Not just traditional fairy tales, but even the Gruffalo lives in a deep dark wood. I believe this is because people are instinctively connected to woodland. The environments in which we evolved in Africa are wooded: either forests or savannah scattered with patches of acacia trees. Most of us have stayed in regions with forest, and it is only relatively recently that humans started to colonise treeless landscapes: deserts, steppes, frozen wastes, and cities.