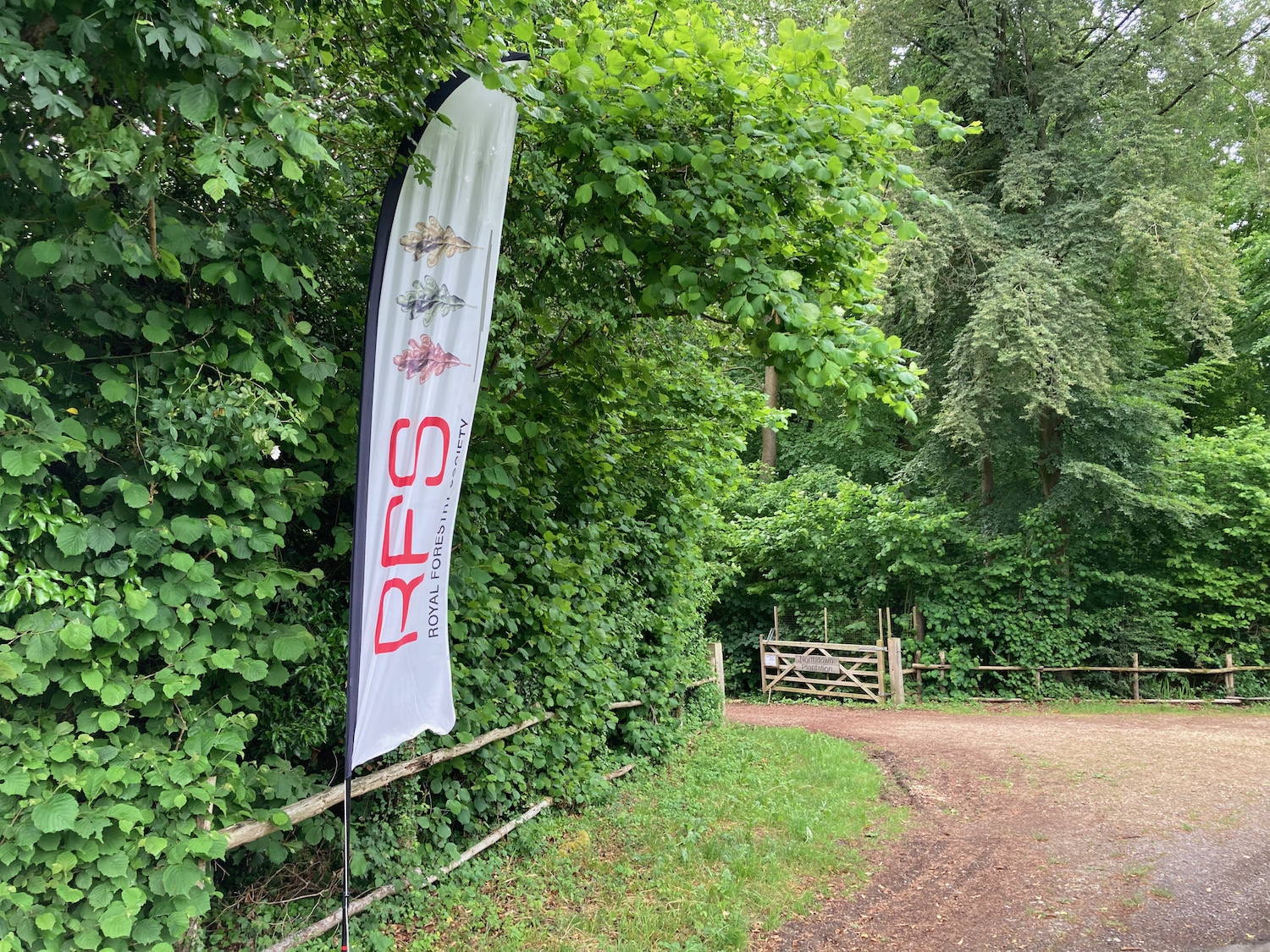 Last month I attended the RFS “intermediate level silviculture” one day course run by Julian Evans at his wood, Northdown Plantation, near Overton in Hampshire. I read his book “A wood of our own” in October 2007 before I bought Century Wood, and it was part of my decision to buy a wood. I’ve said before that it’s “the book I compare other woodland owners’ books against”. So it was very special to finally visit the wood itself.

There were two dozen of us there on the day: a mixture of small woodland owners like me; staff of wildlife trusts, the National Trust, and Windsor Great Park; and independent forestry consultants. The RFS helpfully provide Continuing Professional Development certificates for courses like this to people who need them.

The day was mostly Julian giving brief lectures off the cuff or with a flipchart at various places in the wood. “Intermediate” was explained as being the stage between planting and final harvesting, and that thinning is the single most important intervention, as it goes on for longest. Thinning may remove poor trees, create growing space, obtain early revenue, create more structure and “dappled shade”, and lots more.

There was one practical exercise and it worked very well: 34 numbered sixty-four year old beech trees around an open space under the canopy with Julian’s flipchart stand. This was between the gate and the crossroads in the centre of the 30 acre wood. We had to assess each tree and decide whether to retain or remove each one. The exercise also made the point very well that the spindly thin understorey beeches were also the same age and just “waiting”.

He also explained types of thinning: mechanically (for example, every third tree), or selective. In the case of selective, low thinning is the removal of diseased, stunted etc trees; crown thinning also favours crowns of good trees; creaming takes out the best trees to generate immediate income.

At lunchtime I wandered off and took some more photos myself and it was great to walk around this wood that I had read about off and on all that time.

One of the features of the wood is good access with a substantial trackway right through the middle, which facilitates both timber extraction and forestry courses, but was laid and maintained for the nearby railway signalling equipment. The downside is frequent access by their staff: there was even a van there during part of my visit.

I also came across this rather nice root plate, revealing the chalk rubble underneath the layer of soil. One of the reasons I always have a good look at a root plate if I get the chance.

In the afternoon, we were joined by Gary Kerr from Forest Research who Julian introduced as the foremost expert on Continuous Cover Forestry. He used oaks in the wood to talk about free growth (ie removing all the trees round the best one to try to accelerate the oak growth rate) and then we went to another beech area and talked about CCF and recruiting smaller trees to replace felled ones.

He summarised CCF in three points, which he repeated now and then in his talk: “carry on thinning; control deer; aim for diversity”. He also said that you should try to get natural regeneration first, then fell larger trees, as you get weeds if you just create space in the canopy and hope for natural regeneration.

Throughout the day there was a lot of emphasis on choosing a plan that fits your aims, which might be timber but might be wildlife or something else. Julian summarises things this way: “If you are clear in your mind about aims, it cascades down to your silvicultural decisions.”

It was very enjoyable. I was a bit sceptical about going on a course at first, but wanted to see the wood. Well worth it. I was originally going to another Julian Evans day last year but it was cancelled due to the pandemic, and it was not at his wood.

After my visit, I read Julian Evans’ follow up book, “What happened to our wood“, for the first time. I realised that I had heard some of the anecdotes and advice from this second book first hand at the wood: such as the importance of pruning timber trees, demonstrated with the descendant of his original telescopic pole saw.

When I wrote a review of the first book last year, I finished by saying “This is not a lyrical account of summer evenings, watching sunsets and listening for the sound of bats wings. But if you share the urge to find a wood and then leave it better than you found it, Julian Evans wants to tell you his story.” Now I feel I’ve heard it first hand.

One Reply to “Visiting Northdown Plantation”